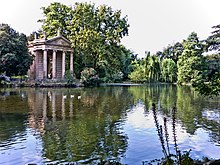 Villa Borghese: the 19th century “Temple of Aesculapius” built purely as a landscape feature, influenced by the lake at Stourhead,Wiltshire, England.

Villa Borghese is a large[1] landscape garden in the naturalistic English manner in Rome, containing a number of buildings, museums (see Galleria Borghese) and attractions. It is the second largest public park in Rome (80 hectares or 148 acres) after that of the Villa Doria Pamphili. The gardens were developed for the Villa Borghese Pinciana (“Borghese villa on the Pincian Hill“), built by the architect Flaminio Ponzio, developing sketches by Scipione Borghese, who used it as a villa suburbana, a party villa, at the edge of Rome, and to house his art collection. The gardens as they are now were remade in the early nineteenth century.

In 1605, Cardinal Scipione Borghese, nephew of Pope Paul V and patron of Bernini, began turning this former vineyard into the most extensive gardens built in Rome since Antiquity. The vineyard’s site is identified with the gardens of Lucullus, the most famous in the late Roman republic. In the 19th century much of the garden’s former formality was remade as a landscape garden in the English taste (illustration, right). The Villa Borghese gardens were long informally open, but were bought by the commune of Rome and given to the public in 1903. The large landscape park in the English taste contains several villas. The Spanish Steps lead up to this park, and there is another entrance at the Porte del Popolo by Piazza del Popolo. ThePincio (the Pincian Hill of ancient Rome), in the south part of the park, offers one of the greatest views over Rome.

A balustrade (dating from the early seventeenth century) from the gardens, was taken to England in the late 19th century, and installed in the grounds of Cliveden House, a mansion in Buckinghamshire, in 1896. The Piazza di Siena, located in the villa, hosted the equestrian dressage, individual jumping, and the jumping part of the eventing competition for the 1960 Summer Olympics. In 2004, a species of Italian snail was discovered, still living on the balustrade after more than 100 years in England.

Villas in the gardens

Other points of interest