Logo of the rione 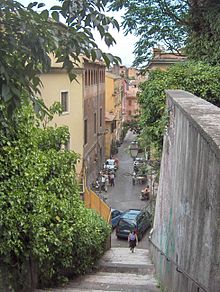 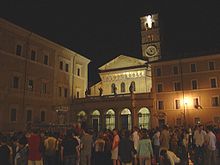 Trastevere is the 13th rione of Rome, on the west bank of the Tiber, south of Vatican City. Its name comes from the Latin trans Tiberim, meaning literally “beyond the Tiber”. The correct pronunciation is [trasˈteːvere], with the accent on the second syllable. Its logo is a golden head of a lion on a red background, the meaning of which is uncertain. To the north, Trastevere borders on to the XIV rione, Borgo.

In Rome‘s Regal period (753-509 BC), the area across the Tiber belonged to the hostile Etruscans: the Romans named it Ripa Etrusca (Etruscan bank). Rome conquered it to gain control of and access to the river from both banks, but was not interested in building on that side of the river. In fact, the only connection between Trastevere and the rest of the city was a small wooden bridge called the Pons Sublicius (Latin: “bridge built on wooden piles”).

By the time of the Republic c. 509 BC, the number of sailors and fishermen making a living from the river had increased, and many had taken up residence in Trastevere. Immigrants from the East also settled there, mainly Jews and Syrians. The area began to be considered part of the city under Augustus, who divided Rome into 14 regions (regiones in Latin); modern Trastevere was the XIV and was called Trans Tiberim.

Since the end of the Roman Republic the quarter was also the center of an important Jewish community,[1] which inhabited there until the end of the Middle Ages.

With the wealth of the Imperial Age, several important figures decided to build their villae in Trastevere, including Clodia, (Catullus‘ “friend”) and Julius Caesar (his garden villa, the Horti Caesaris). The regio included two of the most ancient churches in Rome, the Titulus Callixti, later called the Basilica di Santa Maria in Trastevere, and the Titulus Cecilae, Santa Cecilia in Trastevere.

In order to have a stronghold on the right Bank and to control the Gianicolo hill, Transtiberim was partially included by Emperor Aurelian (270–275) inside the wall erected to defend the city against the Germanic tribes.

In the Middle Ages Trastevere had narrow, winding, irregular streets; moreover, because of the mignani (structures on the front of buildings) there was no space for carriages to pass. At the end of the 15th century these mignani were removed. Nevertheless, Trastevere remained a maze of narrow streets. There was a strong contrast between the large, opulent houses of the upper classes and the small, dilapidated houses of the poor. The streets had no pavement until the time of Sixtus IVat the end of the 15th century. At first bricks were used, but these were later replaced by sampietrini (cobble stones), which were more suitable for carriages. Thanks to its partial isolation (it was “beyond the Tiber”) and to the fact that its population had been multicultural since the ancient Roman period, the inhabitants of Trastevere, called Trasteverini, developed a culture of their own. In 1744 Benedict XIV modified the borders of the rioni, giving Trastevere its modern limits.

Nowadays, Trastevere maintains its character thanks to its narrow cobbled streets lined by medieval houses. At night, natives and tourists alike flock to its many pubs and restaurants, but much of the original character of Trastevere remains. The area is also home to several foreign academic institutions including The American University of Rome and John Cabot University (both of which are private American universities), the American Academy in Rome, the Rome campus of the Thomas More College of Liberal Arts, the Canadian University of Waterloo School of Architecture (between the months of September and December), and the American Pratt Institute School of Architecture therefore serving as home to an international student body.

The unique character of this neighborhood has attracted artists, foreign expats, and many famous people. In the sixties and seventies, the American musicians/composers Frederic Rzewski and Richard Teitelbaum, of the group Musica Elettronica Viva, lived in Via della Luce. Sergio Leone, the director of Spaghetti Westerns, grew up in Viale Glorioso (there is a marble plaque to his memory on the wall of the apartment building), and went to a Catholic private school in the neighborhood. Ennio Morricone, the film music composer, went to the same school, and for one year was in the same class as Sergio Leone.