The Spanish Steps, seen from Piazza di Spagna. The cream-coloured building to the right is the apartment where John Keatslived, now the Keats-Shelley Memorial House.

The monumental stairway of 135 steps was built with French diplomat Étienne Gueffier’s bequeathed funds of 20,000 scudi, in 1723–1725, linking the Bourbon Spanish Embassy, and the Trinità dei Monti church that was under the patronage of the Bourbon kings of France, both located above — to the Holy See in Palazzo Monaldeschi located below. The stairway was designed by architects Francesco de Sanctis and Alessandro Specchi. 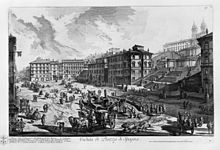 The piazza di Spagna in an 18th-century etching by Giovanni Battista Piranesi, seen from south. The street on the left is Via del Babuino, leading to Piazza del Popolo.

Following a competition in 1717 the steps were designed by the little-known Francesco de Sanctis,[2] though Alessandro Specchi was long thought to have produced the winning entry. Generations of heated discussion over how the steep slope to the church on a shoulder of the Pincio should be urbanised preceded the final execution. Archival drawings from the 1580s show that Pope Gregory XIII was interested in constructing a stair to the recently completed façade of the French church.Gaspar van Wittel‘s view of the wooded slope in 1683, before the Scalinata was built, is conserved in the Galleria Nazionale, Rome.[3] The Roman-educated Cardinal Mazarin took a personal interest in the project that had been stipulated in Gueffier’s will and entrusted it to his agent in Rome, whose plan included an equestrian monument of Louis XIV, an ambitious intrusion that created a furore in papal Rome. Mazarin died in 1661, the pope in 1667, and Gueffier’s will was successfully contested by a nephew who claimed half; so the project lay dormant until Pope Clement XI Albani renewed interest in it. The Bourbon fleur-de-lys and Innocent XIII’s eagle and crown are carefully balanced in the sculptural details. The solution is a gigantic inflation of some conventions of terraced garden stairs.[4] The Spanish Steps, which Joseph de Lalande[5] and Charles de Brosses noted were already in poor condition,[6] have been restored several times, most recently in 1995. 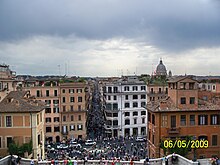 Fontana della Barcaccia, seen from the top of the Spanish Steps. The narrow Via Condotti, home to many of Rome’s designer shops, runs up the picture.

In the Piazza di Spagna at the base is the Early Baroque fountain called Fontana della Barcaccia (“Fountain of the ugly Boat”), built in 1627-29 and often credited to Pietro Bernini, father of a more famous son, Gian Lorenzo Bernini, who is recently said to have collaborated on the decoration. The elder Bernini had been the pope’s architect for the Acqua Vergine, since 1623. According to a legend, Pope Urban VIII had the fountain installed after he had been impressed by a boat brought here by a flood of the Tiber river.

In the piazza, at the corner on the right as one begins to climb the steps, is the house where English poet John Keats lived and died in 1821; it is now a museum dedicated to his memory, full of memorabilia of the English Romantic generation. On the same right side stands the 15th century former cardinal Lorenzo Cybo de Mari‘s palace, now Ferrari di Valbona, a building altered in 1936 to designs by Marcello Piacentini, the main city planner during Fascism, with modern terraces perfectly in harmony with the surrounding baroque context.

At the top the Viale ramps up the Pincio which is the Pincian Hill, omitted, like the Janiculum, from the classic Seven hills of Rome. From the top of the steps the Villa Medici can be reached.

The Spanish Steps, as seen from the Fontana della Barcaccia in the Piazza di Spagna, at dusk on a summer’s eve.

During Christmas time a 19th-century crib is displayed on the first landing of the staircase. During May, part of the steps are covered by pots of azaleas. In modern times the Spanish Steps have included a small cut-flower market. The steps are not a place for eating lunch, being forbidden by Roman urban regulations, but they are usually crowded with people.

The 1953 film Roman Holiday, starring Audrey Hepburn and Gregory Peck, made the Spanish Steps famous to an American audience.

The apartment that was the setting for The Roman Spring of Mrs Stone (1961) is halfway up on the right. Bernardo Bertolucci‘s Besieged (1998) is also set in a house next to the Steps. The Steps were featured prominently in the film version of “The Talented Mr. Ripley” starring Matt Damon in the title role.

The Bob Dylan song “When I Paint My Masterpiece,” first recorded in 1971 by The Band and later appearing on the album Bob Dylan’s Greatest Hits Vol. II, mentions both the “Spanish Stairs” and the Colosseum. Norwegian singer/songwriterMorten Harket, from A-ha, released a song called “Spanish Steps” on his album Wild Seed in 1995.

The title song from Guy Clark‘s Dublin Blues album (1995) contains the lyric: “I loved you on the Spanish Steps / The day you said goodbye“.

In 2005, American rock band Of A Revolution released One Shot from their album Stories of a Stranger, which contains the lyrics “Rome is burning, you can taste the embers / I am walking hard on Spanish Steps“.

On 16 January, 2008, Italian artist, Graziano Cecchini, covered the Steps with hundreds of thousands of multicoloured plastic balls. He claimed that it was done to make the world notice the situation of the Karen people in Myanmar,[7] and as a protest against the living conditions of artists in Italy.[8]

On 9 November 2009, a multimedia event was held on the Steps to commemorate the fall of the Berlin Wall in 1989; the event included the erection of replicas of parts of the wall.