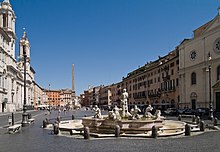 Fountain of the four Rivers with Egyptianobelisk, in the middle of Piazza Navona

Piazza Navona is a city square in Rome, Italy. It is built on the site of the Stadium of Domitian, built in 1st century AD, and follows the form of the open space of the stadium.[1] The ancient Romans came there to watch the agones (“games”), and hence it was known as ‘Circus Agonalis’ (competition arena). It is believed that over time the name changed to ‘in avone’ to ‘navone’ and eventually to ‘navona’.

Defined as a public space in the last years of 15th century, when the city market was transferred to it from the Campidoglio, the Piazza Navona was transformed into a highly significant example of Baroque Roman architecture and art during the pontificate of Innocent X, who reigned in 1644-1655 and whose family palace, the Palazzo Pamphili, faced onto the piazza. It features important sculptural and architectural creations: in the center stands the famous Fontana dei Quattro Fiumi or Fountain of the Four Rivers (1651) by Gian Lorenzo Bernini, topped by the Obelisk of Domitian, brought here in pieces from the Circus of Maxentius;[2] the church of Sant’Agnese in Agone by Francesco Borromini, Girolamo Rainaldi, Carlo Rainaldiand others; and the aforementioned Pamphili palace, also by Girolamo Rainaldi, that accommodates the long gallery designed by Borromini and frescoed by Pietro da Cortona.[3]

Piazza Navona has two additional fountains: at the southern end is the Fontana del Moro with a basin and four Tritons sculpted by Giacomo della Porta (1575) to which, in 1673, Bernini added a statue of a Moor, or African, wrestling with a dolphin, and at the northern end is the Fountain of Neptune (1574) created by Giacomo della Porta. The statue of Neptune in the northern fountain, the work of Antonio Della Bitta, was added in 1878 to make that fountain more symmetrical with La Fontana del Moro in the south.

At the southwest end of the piazza is the ancient ‘speaking’ statue of Pasquino. Erected in 1501, Romans could leave lampoons or derogatory social commentary attached to the statue.

During its history, the piazza has hosted theatrical events and other ephemeral activities. From 1652 until 1866, when the festival was suppressed, it was flooded on every Saturday and Sunday in August in elaborate celebrations of the Pamphilj family. The pavement level was raised in the 19th century and the market was moved again in 1869 to the nearby Campo de’ Fiori. A Christmas market is held in the piazza.