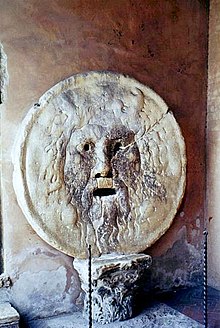 The Mouth of Truth.

La Bocca della Verità (English: the Mouth of Truth) is an image, carved from Pavonazzo marble, of a man-like face, located in the portico of the church of Santa Maria in Cosmedin in Rome, Italy. The sculpture is thought to be part of a first-centuryancient Roman fountain, or perhaps a manhole cover, portraying one of several possible pagan gods,[1] probably Oceanus. Most Romans believe that the ‘Bocca’ represents the ancient god of the river Tiber.

The most famous characteristic of the Mouth, however, is its role as a lie detector. Starting from the Middle Ages, it was believed that if one told a lie with one’s hand in the mouth of the sculpture, it would be bitten off. The piece was placed in theportico of the Santa Maria in Cosmedin in the 17th century. This church is also home to the supposed relics of Saint Valentine.

Scene from Roman Holiday with Audrey Hepburn and Gregory Peck

The Mouth of Truth is known to English-speaking audiences mostly from its appearance in the 1953 film Roman Holiday. The film also uses the Mouth of Truth as a storytelling device since both Hepburn’s and Peck’s characters are not initially truthful with each other.

This scene from Roman Holiday was parodied in the 2000 Japanese film Sleeping Bride by Hideo Nakata. It was also replicated in the film Only You starring Robert Downey Jr. and Marisa Tomei.

In part two of the manga JoJo’s Bizarre Adventure, Battle Tendency, the Mouth of Truth is the entrance to the cavern where the three “Men in the Column” were sleeping.

The Megaman Battle Network 4 video games (“Red Sun” and “Blue Moon”) feature a statue resembling The Mouth of Truth at the beginning of the World Netbattling championship tournament in Netopia by which Lan and MegaMan must pass by having Lan stick his hand inside the statue that says that it will bite off Lan’s hand if he is not actually a contestant; Lan reluctantly agrees to stick his hand inside after the statue taunts Lan about being nervous. The statue turns out to be a fingerprint scanner which verifies Lan’s identity to let him pass.

The Mouth of Truth is also featured as a furniture item in the Animal Crossing video game series. If the player touches the Mouth of Truth, its depicted expression changes to that of an angry frown, referencing the belief that telling a lie with one’s hand in the mouth of the statue results in the hand being bitten off.

Electronic coin-operated reproductions of the Mouth are found in fairgrounds of Spain, Hungary and even Japan, at some motorway service stations in the UK and Croatia, usually together with photo booths. There is also a full size replica of the Mouth of Truth at the private Pikake Botanical Gardens in Valley Center, California.

There is a similar sculpture of a lion in Mahabalipuram, Tamil Nadu, India that, according to local lore, bites off one’s hand if a lie is told.

In France at Parc Astérix, one reproduction of the Mouth is used as a bin and thanks the people dropping garbage down its throat.