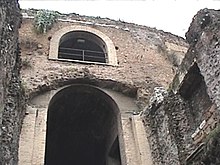 The entryway to the Mausoleum of Augustus.

Cinerary urn of Agrippina which now rests in the Palazzo dei Conservatori of theCapitoline Museums near the tabularium.

The Mausoleum of Augustus (Italian: Mausoleo di Augusto) is a large tomb built by the Roman Emperor Augustus in 28 BC on the Campus Martius in Rome, Italy. The Mausoleum is located on the Piazza Augusto Imperatore, near the corner with Via di Ripetta as it runs along the Tiber. The grounds cover an area equivalent to a few city blocks, and nestle between the church of San Carlo al Corso and that Museum of the Ara Pacis.

The interior of the Mausoleum is no longer open to tourists, as looting, time, and carelessness have stripped the ruins of marbled elegance. Even as ruins, it is a dominating landmark on the northern side of the Campus Martius.

The Mausoleum was one of the first projects initiated by Augustus in the city of Rome following his victory at the Battle of Actium in 31 BC. The mausoleum was circular in plan, consisting of several concentric rings of earth and brick, planted with cypresses on top of the building and capped (possibly, as reconstructions are unsure at best) by a conical roof and a statue of Augustus. Vaults held up the roof and opened up the burial spaces below. Twin pink granite obelisks flanked the arched entryway; these now stand, one at the Piazza dell’Esquilino (on the northwest side of the Basilica of Santa Maria Maggiore) and other at the Quirinal fountain. The completed Mausoleum measured 90 m (295 ft) in diameter by 42 m (137 ft) in height.

A corridor ran from the entryway into the heart of the Mausoleum, where there was a chamber with three niches to hold the golden urns enshrining the ashes of the Imperial Family. Remains buried inside the Mausoleum before Augustus include those of Marcus Claudius Marcellus (who was the first to be buried there, in 23 BC), Marcus Agrippa in 12 BC, Nero Claudius Drusus in 9 BC, Octavia Minor (the sister of Augustus) in 9 or 11 BC, Gaius and Lucius, grandsons and heirs of Augustus. After the emperor himself, the Mausoleum hosted the ashes of Livia (Augustus’ wife), Germanicus, Agrippina the Elder, Agrippina’s daughter Julia Livilla, Nero (son of Germanicus), Drusus Caesar (son of Germanicus), Caligula,Tiberius, Drusus Julius Caesar (son of Tiberius), Nero Claudius Drusus and Antonia Minor (parents of Claudius), Claudius, Britannicus (the son of Claudius), the embalmed body of Poppaea Sabina wife of Nero, Julia Domna (later moved toMausoleum of Hadrian), and Nerva, the last emperor for whom the mausoleum was opened.

In 410, during the sack of Rome by Alaric, the pillaging Visigoths rifled the vaults, stole the urns and scattered the ashes, without damaging the structure of the building (Lanciani). In the Middle Ages the artificial tumulus was fortified as a castle— as was the mausoleum of Hadrian, which was turned into the Castel Sant’Angelo— and occupied by the Colonna family. After the disastrous defeat of the Commune of Rome at the hands of the Count of Tusculum in 1167, the Colonna were disgraced and banished, and their fortification in the Campo was dismantled. Thus it became a ruin.

It was not until the 1930s that the site was opened as a preserved archaeological landmark along with the newly moved and reconstructed Ara Pacis nearby. The restoration of the Mausoleum of Augustus to a place of prominence featured inBenito Mussolini‘s ambitious reordering of the city of Rome which strove to connect the aspirations of Italian Fascism with the former glories of the Roman Empire. Mussolini viewed himself especially connected to the achievements ofAugustus, seeing himself as a ‘reborn Augustus’ ready to usher in a new age of Italian dominance.