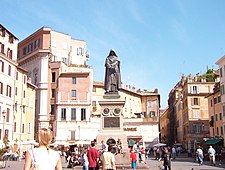 The monument to philosopher Giordano Bruno at the centre of the square.

Campo de’ Fiori (meaning in English: Field of Flowers) is a rectangular square south of Piazza Navona in Rome, Italy, at the border between rione Parione and rione Regola. It is just diagonally southeast of the Palazzo della Cancelleria and one block northeast of the Palazzo Farnese. Campo de’ Fiori, translated literally from Italian, means “field of flowers“. The name was first given during the Middle Ages when the area was actually a meadow.

In Ancient Rome the area was unused space between Pompey’s Theatre and the flood-prone Tiber. Though the Orsini established themselves on the south flank of the space in the 13th century, until the 15th century the square remained undeveloped. The first church in the immediate vicinity was built during the pontificate of Boniface IX (1389-1404), Santa Brigida a Campo de’ Fiori; with the building-up of the rione, the church has now come to face that part of the former square that is now Piazza Farnese. In 1456 under Pope Callixtus III, Ludovico Cardinal Trevisani paved the area: This was part of a greater project of improvement of the rione Parione. This renewal was both the result and cause of several important buildings being built in the surroundings; in particular, the Orsini palace on Campo de’ Fiori was rebuilt. The Renaissance Palazzo della Cancelleria can be seen in Vasi’s etching, rising majestically beyond the far right corner of the square. 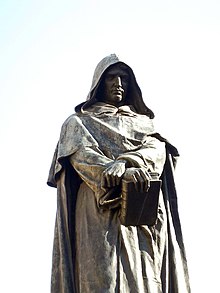 A close-up of the statue of Giordano Bruno.

Campo de’ Fiori has never been architecturally formalized. The square has always remained a focus for commercial and street culture: the surrounding streets are named for trades—Via dei Balestrari (crossbow-makers), Via dei Baullari (coffer-makers), Via dei Cappellari (hat-makers), Via dei Chiavari (key-makers) and Via dei Giubbonari (tailors). With new access streets installed by Sixtus IV— Via Florea and Via Pellegrino— the square became a part of the Via papale (“Pope’s road”), the street linking Basilica of St. John Lateran and the Vatican and run through by the Pope after his election during the so called “Cavalcata del possesso”, when he reached the lateran from the Vatican to take possession of the city. This brought wealth to the area: A flourishing horse market took place twice a week (Monday and Saturday) and a lot of inns, hotels and shops came to be situated in Campo de’ Fiori. The most famous of them, the “Taverna della Vacca” (“cow’s Inn”) still stands at the south west corner of the square, at the begin of Via de’ Cappellari, and belonged to Vannozza dei Cattanei, the most famous lover of Alexander VI Borgia, whose family seal is still on display on the house facade. 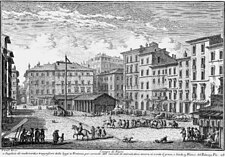 Executions used to be held publicly in Campo de’ Fiori. Here, on 17 February 1600, the philosopher Giordano Bruno was burnt alive for heresy, and all of his works were placed on the Index of Forbidden Books by the Holy Office. In 1887 Ettore Ferrari dedicated a monument to him on the exact spot of his death: He stands defiantly facing the Vatican, reinterpreted in the first days of a reunited Italy as a martyr to freedom of thought. The inscription on the base recites:

(English: To Bruno – the century predicted by him – here where the fire burned)

The body of theologian and scientist Marco Antonio de Dominis was also burned in this square, in 1624.

The demolition of a block of housing in 1858 enlarged Campo de’ Fiori, and since 1869 a daily vegetable and fish market has been held there, which before took place every morning in piazza Navona. The ancient fountain known as la Terrina (the “soupbowl”) that once watered cattle, was resited in 1889, and replaced with a copy: This now keeps flowers fresh. Its inscription: FA DEL BEN E LASSA DIRE (“Do the good and let them talk”) suits the gossipy nature of the marketplace. In the afternoons, local games of football give way to set-ups for outdoor cafés.
At night, Campo de’ Fiori is a meeting place for tourists and young people coming from the whole city. In the years after 2000 it has turned into one of the most dangerous places of the city during night, theater of repeated assaults and affrays by drunkards and soccer supporters.[1][2]