The basilica of Santa Maria degli Angeli e dei Martiri, built in the tepidarium of the baths

The Baths of Diocletian (Thermae Diocletiani) in Rome were the grandest of the public baths, or thermae built by successive emperors. Diocletian‘s Baths, dedicated in 306, were the largest and most sumptuous of the imperial baths. The baths were built between the years 298 and 306. The project was originally commissioned by Maximian upon his return to Rome in the autumn of 298 and was continued after his and Diocletian‘s abdication under Constantius, father of Constantine.[1]Although many baths in and around Rome had the same elements, the Baths of Diocletian are unique by their size.

The Baths occupy the high-ground on the northeast summit of the Viminal, the smallest of the Seven hills of Rome, just inside the Agger of the Servian Wall. They served as a bath for the people residing in the Viminal, Quirinal, and Esquiline quarters of the city.[2] The Quadrigae Pisonis, a 2nd-century monument with various reliefs, some private homes, and a relief representing the temple of Quirinus once stood at the site but were demolished to build the baths.[1] The water supply was provided by the Aqua Marcia, an aqueduct that had long served the city of Rome since the early 2nd century. To properly supply the baths, the supply of water to the city was increased under the order of Diocletian.[1] The baths may have also been supplied by the Aqua Antoniniana, which was originally positioned to supply Caracalla‘s baths in the early 3rd century.[3]

The Baths were commissioned by Maximian in honor of co-Emperor Diocletian in 298, the same year he returned from Africa. Evidence of this can be found in bricks from the main area of the baths, which distinctly show stamps of the Diocletianic period. These, according to the ancient guidebook Mirabilia Urbis Romae, were known as “Palatium Diocletiani”.[2] This evidence shows the effect of the massive project on the brick industry in that all work by them was redirected and under control of the emperor.[4] Building took place between the year it was first commissioned and was finished sometime between the abdication of Diocletian in 305 c.e. and the death of Constantius in July 306 AD.[1] The Baths remained in use until the siege of Rome in 537 when the Ostrogothic king Vitiges cut off the aqueducts. 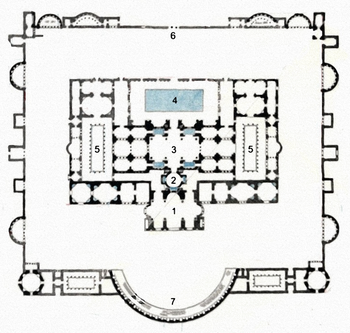 One of the four inscriptions around the main entrance to the Baths of Diocletian reads, translated from Latin, “Our Lords Diocletian and Maximian, the elder and invincible Augusti, fathers of the Emperors and Caesars, our lords Constantius and Maximian and Severus and Maximin, noblest Caesars, dedicated to their beloved Romans these auspicious Baths of Diocletian, which the divine Maximin on his return from Africa ordered to be built and consecrated in the name of his brother Diocletian, having purchased the premises required for so huge and remarkable work and furnishing them with the most sumptuous refinement.”[2] The baths take up 120,000 square metres of the district, which is about the same size as the Baths of Caracalla. The central hall of the baths was 280 by 160 metres and was derived from plans for the Basilica of Constantine.[disambiguation needed][1] However, the capacity for the Baths of Diocletian was much larger in comparison. This could be because the entrance and rooms were made larger than its predecessor in block size, which allowed more space and functionality.[5]According to Olympiodorus, the baths were able to hold up to 3,000 people at one time. However, this claim is disputed because Olympiodorus never mentioned how he came about this figure in the first place.[2]

The word frigidarium originates from the Latin word frigeo, which means “to be cold”. The prominence of the room and its conjoining rooms showed the increase in popularity cold baths had during the early 4th century compared to the hot baths. This also could have been a result of the depletion of the surrounding forests, resulting in a lack of fuel. The frigidarium, or Cella frigidaria consisted of a pool and a host of smaller baths connected to the main room. Water entering the room would come from a pipe or cistern and would exit through a drain within the pool. The water from the pool was thought to have been reused to flush latrines within the complex. The frigidarium was used mainly as a swimming pool or a cold-water bath, depending on the time. Normally, one would continue on to the frigidarium after using the hot-water baths or after exercising in the palaestra. Noting the massive size of the room, it was believed to have also been used as a social room. This idea is supported by the presence of statues and elaborate niches along the walls.[5] On each end of the frigidarium are large shallow pools that were made to be open-air bathing pools.

The word caldarium comes from the Latin word caleo, meaning “to be hot”. It also has roots in the Greek word that means “innermost room”. The purpose of the caldarium was that of the principle bath chamber within the baths. From its namesake, the room was used for a hot-water bath or for saunas or steam rooms. The room could have also been used for oiling before or after a bath, but, in most cases, this was moved to a separate room off of the caldarium.[5] The caldarium, or Cella caldaria, was rectangular in shape with many octagonal rooms found near it in the corner of the structure. The area seemed to be referencing the older baths of Nero and Titus in its initial design. What set this caldarium apart was the sheer scale of the room compared to its predecessors. It continued a basilica-like theme from the frigidarium with a cross-vaulted middle bay and three projecting apses. These architectural techniques created the feeling of a more open space for the patron. Dressing rooms, also known as apodyteria, were located on either side of the calderium. Along the sides of the caldarium were private rooms that are believed to have had multiple functions, including private baths, poetry readings, rhetoricians, etc. Other areas attached to the caldarium were a garden, lounging rooms, gymnasiums, and small halls and semicircular exedrae used as lecture and reading rooms.[4]

A rectangular halls connected to the hemicycle have been suggested to be libraries because of their similar set-up to those in the Baths of Caracalla.[2] Historians, to support this theory, have demonstrated that these halls with their niches could properly house books from that day. References to the presence of libraries within the baths of Diocletian both confirm and contradict themselves, such as the case of the author of the life of Probus. In it, he mentions that part of the Bibliotheca Ulpia, which are found in the Forum of Trajan, are being housed within the baths; a statement he later contradicts when later referencing the Bibliotheca Ulpia. However, with the presence of similar rooms that suggest that they were libraries found in the Baths of Caracalla and the Baths of Trajan, it is not a stretch to theories to propose that the baths of Diocletian contained a library.[6]

Within the frigidarium, the use of external buttresses for the cross vaults were considered by some to be the first example of the scientific system of thrusts and counter-thrusts in architecture.[2] Concerning the baths as a whole, it has been described as evoking the Imperial style, or a “Classical” image, which is the style of “manipulation of space”.[7] To manipulate the space within this style, the forms of the building were simple and give the impression of a vast amount of open space. The builders of the baths used different techniques to create this effect. The exterior walls of the bath were encrusted with stucco to give the impression of stonework.[2] This technique was quite common within the structures built during the Imperial style of Roman architecture, e.g., The baths of Constantine, the Basilica Nova, and parts of the Sessorian bridge.[8] The interior parts of the bath were supported by vaulting ceilings and arches to create curvilinear lines. The structure of the roof is an excellent example of Classical design. Architects used sloped forms to cover curved extrados (the outer surface of the arch) of the vaulted halls.[2]

Many of the rooms have been preserved because various parts later were converted to ecclesiastical or other use, including:

Other remains of the baths are visible several streets away.

The church of San Bernardo alle Terme recycled one of only two circular towers in the rectangular boundary of the baths, flanking its southwestern wall. Between these two towers, one large exedra used to exist as part of the same wall. Today, only its outline may be appreciated in the layout of Piazza della Repubblica.

The Smithsonian’s National Museum of Natural History building in Washington, D.C. was partially based on design elements from the Baths of Diocletian, including the semicircular windows.